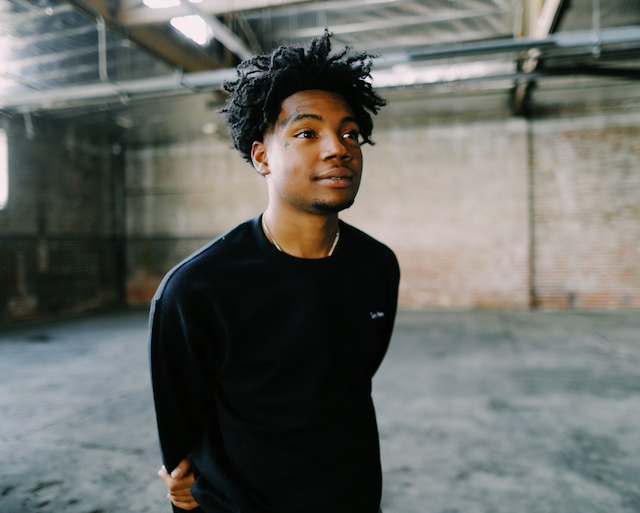 In just a few years’ time, East Atlanta’s phenom-in-the-making Baby Plug has shown unbelievable artistic versatility in his ability to handle whatever flow or beat comes his way—and as his sure-to-be-unstoppable 2020 will prove, he’s just getting started.

The Missouri-born 18-year-old was bitten by the musical bug from an early age, earning the nickname “Jigga” due to his footwork abilities to whatever was pumping on the stereo: “I used to jig all the time.” Early formative influences included Southern rap veterans like Yo Gotti, Lil Wayne, and UGK, but the rapping efforts in the always-flourishing musical community of East Atlanta served as young Baby Plug’s biggest inspiration. “Seeing people rapping made me want to do it,” he remembers. “I thought anyone could do it. I loved music, but seeing people around me doing it made me want to do it even more.”

His debut single, “BP” from 2018, showcased but one side of Baby Plug’s talents, with his languid and word-stuffed cadence laid atop a hypnotic guitar lick. The single dropped shortly before he went to jail on weed charges; after being released in September of 2018, he holed up in a recording studio for two weeks straight and unloaded hit after hit—including the catchy and effortless-sounding “Hibachi,” which ended up catching the ear of the FADER, which named the song one of the “10 Best New Rap Songs Right Now” upon release. “I just came up with a song foolin’ around, while I was with my boys,” he recalls on the song’s genesis. “It was really like a freestyle.”

Baby Plug’s current influences include Future (“I’ve seen him grow, so I look up to him”), and you can certainly hear the Atlanta superstar’s imprint on the highly melodic and impressive Lemme Pop My Shxt project from last year, which introduced yet another facet to Baby Plug’s increasingly prismatic musical personality. What’s next from here? A forthcoming EP, music videos, collaborative projects with Yung Icey and Black Mayo, and a full-length project by the end of the year. “I’m trying to make hits and get my numbers up. That’s gotta count,” Baby Plug states regarding his goals for 2020—and he’s guaranteed to make waves and then some.