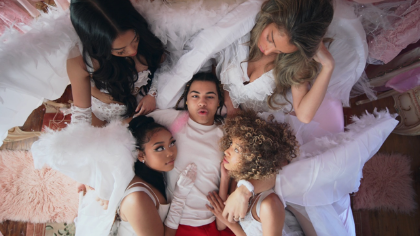 One of the West Coast’s most promising breakout stars, 24kGoldn has unleashed the official video for “City of Angels.” The visual was directed by Nicholas Jandora and filmed in Los Angeles. Check it out HERE.

“City Of Angels” was added to Today’s Top Hits on Spotify while breaking into the Top 30 on the Viral charts, and was also added to Today’s Hits on Apple Music. The song recently broke into the Top 50 on the US Spotify chart and is climbing in tandem on the Global chart. The two-minute track showcases the more alternative side to 24kGoldn, as shown by adds on alt radio stations throughout the States and UK. At over 9M streams this week and over 50M in total, 24kGoldn’s momentum is showing a promising trajectory.

“City of Angels” is featured on Goldn’s Dropped Outta College EP, which released late last year. The eight tracks collectively demonstrate his breadth of talent and tells the story of his life as a budding artist and a college student at USC – exploring the emotions, relationships, and desires he felt at the time. Listen to Dropped Outta College in full HERE.